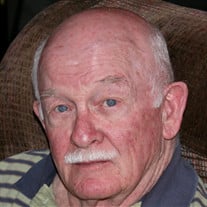 Memorials to the family for later designation. Roger Charles O’Gara was born on January 27, 1941 in Laurel, Nebraska to Bernard and Marie (Joslin) O’Gara. He grew up in Hartington, Nebraska where he attended Holy Trinity Catholic Grade School and graduated from Cedar Catholic High School in 1959. Roger attended seminary in Conception, Missouri for one year before returning to Hartington. As a young boy, Roger participated in football, basketball and track. He learned the trade of meat cutting at an early age while working at the family grocery store. Roger married Carol Hauger on July 18, 1962 at the Church of St. Columba in Mayfield, South Dakota and they were blessed with three children: Teresa, Tim and Tammy. Roger and Carol have raised their family in Yankton, South Dakota and Omaha before settling in Elkhorn in 1971. Roger worked as a meat cutter for Safeway and for Budweiser in distribution until his retirement in 2004. He was an active member of the Elkhorn community, serving 20 years on the Elkhorn Fire and Rescue Squad, Planning Board, Elkhorn Eagles, Elkhorn Lions Club, St. Patrick’s Catholic Church and Elkhorn Auxiliary Police. Roger enjoyed trips to Florida, bowling and loved to golf. As the family remembers Roger, many descriptive words come to mind: stubborn, hard boiled, caring, jokester, frank, unyielding, talkative, fun, fun-loving, extravert and high energy. El Bees was a regular Friday night stop and he enjoyed sharing his suckers with the neighbor girl, Aubrey. Roger adored little kids and treasured the time he could spend with his grandchildren. He was confident in his opinions and could back them up with facts. Roger had an uncanny math brain, able to figure problems quickly. His quick wit and pleasant demeanor was always welcome. Roger could often be heard saying “You old buzzard” or affectionately referring to someone as “Henry”. Roger passed away on Saturday, March 07, 2020 at Hospice House in Omaha, Nebraska at the age of 79 years, 1 month and 9 days. He was preceded in death by his parents Bernard and Marie, sister Mary Jean Mejak and grandson Tyler Peters. Roger is survived by his wife Carol; Children Teresa and Ty Cox of North Platte, NE, Timothy and Marsha of Omaha and Tamara and Craig Peters of Bennington, Nebraska; grandchildren Caleb and Cameron Cox, Brock and Blake O’Gara, Drew and Mylie Ketterson and Eric Peters; brother Jerome of Mondamin, Iowa; sisters Kathy (Gary) Benschoter of Watsonville, California and Patricia and Robert Bowen of Bennington, Nebraska.

Memorials to the family for later designation. Roger Charles O&#8217;Gara was born on January 27, 1941 in Laurel, Nebraska to Bernard and Marie (Joslin) O&#8217;Gara. He grew up in Hartington, Nebraska where he attended Holy Trinity Catholic... View Obituary & Service Information

The family of Roger Charles O'Gara created this Life Tributes page to make it easy to share your memories.

Memorials to the family for later designation.

Send flowers to the O'Gara family.