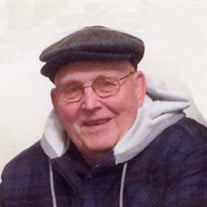 Ronald L. Schmidt was born April 30, 1943, in Blair, Nebraska, to Harry and Caroline (Friedrichsen) Schmidt. Ron grew up in rural Washington County where he attended Dornacker School and graduated from Bennington High School in 1961. Ron grew up on a farm, and worked there at a young age. He was involved with the local 4-H Club, and showed lambs. With a couple of his classmates, Ron joined the Army National Guard following high school in 1961. He spent basic training at Fort Ord, California, but otherwise served in Nebraska, assisting with the race riots in Omaha and during area flooding. He was honorably discharged in 1966. Ron married Patsy Peterson at St. Patrick’s Catholic Church in Elkhorn, September 3, 1966, and to this union, two children were born: Matthew and Audra. Ron built the house they’ve lived in for more than 50 years on North 190th Avenue. Ron was an accomplished finish carpenter. He began his career with Kruse Cabinets and went into business with his father-in-law, Leonard Peterson, before finishing his career with Dan Witt Builders, Ted Grace Homes, and Curt Hofer Construction. Ron loved working with his hands, and could often be found building, repairing, or painting almost anything that needed attention. When Ron was 12 years old, he began mowing the German Cemetery, north of Bennington. Later in the late ‘70s, Ron became one of the caretakers of Mt. Calvary Cemetery in Elkhorn, the parish cemetery for St. Patrick’s Church. He sold and marked graves, and tended to the cemetery for over 30 years. Ron also served on the St. Patrick’s Church Council, amongst numerous other duties at the church. When he wasn’t working or helping with church or cemetery concerns, Ron enjoyed caring for his vegetable garden, watching RFD TV (mostly to see the old tractors), or putting together a puzzle … the more complicated, the better. He and Patsy took up golfing, and fell in love with it quickly, cherished the times on the golf course with Larry and Cindy Glasshoff and Dave and Carol Beringer. He even learned to make balloon animals and would dress as a clown when volunteering at the Mount Michael Fall Festival’s Kiddie Korral. Ron was a hard-working, loyal, quiet, determined, and unassuming man. He was a good dancer and loved listening to country music. His favorite movie was “Grumpy Old Men” and he loved spicy food, and dinner out at Farmer Brown’s. His biggest pet peeve was lazy people. He loved Patsy, Matt, and Audra, and was heartbroken when Audra passed away in 1977. Ron will be remembered for being a good and loving husband and father. Ron died suddenly at his home near Bennington Monday, October 28, 2019, at the age of 76 years, 5 months, and 28 days. He was preceded in death by his parents, Harry and Caroline; daughter Audra; and his sister, Marcia Hoban. Ron is survived by his wife of 53 years, Patsy; son and daughter-in-law Matt and Michele Schmidt of Brookings, South Dakota; brother-in-law Richard Hoban of Elkhorn; and brother-in-law and sister-in-law Mick and Diane Peterson of Bennington. Ronald L. Schmidt, age 76, of Bennington, NE, died 10/28/19. Preceded in death by parents Harry & Caroline Schmidt, daughter Audra Schmidt, and sister Marcia Hoban. Survived by wife Patsy of Bennington, son and daughter-in-law Matt & Michele Schmidt of Brookings, SD, brother-in-law Richard Hoban of Elkhorn, and brother-in-law and sister-in-law Mick & Diane Peterson of Bennington. Memorial Mass 10:30 AM Saturday, St. Patrick’s Catholic Church, Elkhorn. Inurnment at Mt. Calvary Cemetery, Elkhorn. Visitation Friday from Noon to 7 PM with family receiving friends from 5-7 PM and a Wake service at 7 PM all at the funeral home in Elkhorn. In lieu of flowers, memorials to Mt. Calvary Cemetery or Mt. Michael.

The family of Ronald Larry Schmidt created this Life Tributes page to make it easy to share your memories.

Send flowers to the Schmidt family.