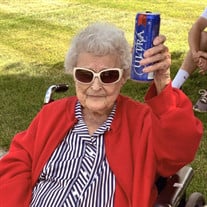 Ruth Dunavant (Sheley) Dunavant, Ruth Sheley March 12, 1923 – September 11, 2021 Ruth Sheley was the youngest of five children born to Amy Lee Goodin and Mervin Moore Sheley. She was born in Mexico, Missouri on March 12, 1923. She grew up in Mexico and Fulton, Missouri where she received her formal education. Like so many others of her generation they endured many hardships of the Depression and World War II. During Ruth’s life she was married three times, of these marriages two sons were born to her: David Hughes and Donald Dunavant. Her last marriage came on December 21, 1946 at Fulton, Missouri to James Keough Dunavant who died in an automobile accident on February 26, 1968. Ruth was a homemaker all of her life. Shortly after her husband’s death she relocated to Omaha, Nebraska from St. Louis, Missouri to be near her family. She had many interests including gardening, music, and her greatest love was reading about all things important to her. She was a member of Peace Presbyterian Church in Elkhorn, Nebraska. She was an independent and strong-willed woman who faced life’s challenges with unwavering Christian attitude and most of the time with humor. As her health failed, she was forced to leave the home she loved so much. She moved into Azria Health Montclair nursing home where she resided until her death with the assistance of Ascera Care Hospice. Ruth was preceded in death by her parents, all of her siblings, and her husband. Left to mourn her loss are her two sons, six grandchildren, and many great grandchildren, nieces, and those who knew her. Per Ruth’s request, she was buried in a private graveside service at Prospect Hill Cemetery in Elkhorn, Nebraska.

The family of Ruth Dunavant created this Life Tributes page to make it easy to share your memories.

Send flowers to the Dunavant family.