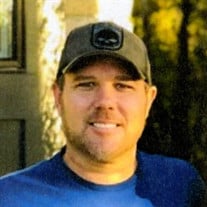 In Lieu of flowers, memorials to the Ashland Greenwood Wrestling Club or the MWC Wrestling Academy In the 41 years he was given on earth, Ryan fully used his life to become many things to many people. A husband, father, son, brother, uncle, friend, coworker, boss...a hero to all those around him. Ryan was born to Randy Christo and Ronelle (Philmalee) Christo on August 26th, 1978 in Albion, NE. He grew up in Albion where he attended grade school and graduated from Albion High School in 1996. As a young boy, he developed a love and passion for wrestling and the outdoors. As Ronelle spent days transporting the boys to countless youth wrestling tournaments, the boys built an absolute unwavering brotherhood during their time on the road and on the mat. Each of these boys had different upbringings, however they shaped each other into the men, husbands, and fathers they are today. While in High School, Ryan was part of the 1995 State Class B Championship team. He was runner up in 1995 at 185 and became a state champion in 1996 at 189. To Ryan, Carrie was the girl next door. Then a best friend and high school sweetheart. A first love, then a forever love after being united in Christ on September 6, 2003. They made their home in the Lincoln/Hickman area before moving to their forever home in Ashland, NE. They were blessed with 4 beautiful children; Saige (18), Cira (16), Blaine (15), and Isaac (12). Ryan worked as a utility lineman for LES (Lincoln, NE) before becoming business owners of R & R Christo Construction with his father, Randy. Vibrant and full of life, he was a mid-afternoon dancing enthusiast, loved to karaoke, a summer boating entertainer, an adventurous spirit who was always up for a spontaneous trip, or a Sunday fun day. Ryan also loved to fly. He would take his family flying, in the hopes his children would build the love for it just as it was passed on to Ryan from his father. As an avid outdoorsman, Ryan was passionate about fishing, archery hunting, and always looked forward to he and his dad's annual elk hunt. Ryan enjoyed the precious times spent with his sons out on the boat or in a deer stand. Ryan was always so proud to watch Saige pursue her passion in volleyball and Cira use her talents at cheer competitions. His final moment of pride was seeing his son Blaine compete in the high school state wrestling tournament. Despite the pain and struggles he endured the last year and a half of his life, Ryan never wavered in who he was. He remained a man of solid, unshakeable faith, a devoted family man, and a fighter. Ryan M. Christo, 41, of Ashland, NE, was called home by our heavenly Father on February 27th, 2020 at UNMC surrounded by family and friends. He fought so hard for all of us to stay here on earth, but he is now at home with his heavenly Father and many loved ones. A Mass of Christian Burial will be at 10:00 a.m. Tuesday, March 3rd, 2020 at St. Patrick’s Catholic Church in Gretna, NE, with Father Gregory Baxter officiating. Burial will follow at the Ashland Cemetery. Please plan to join us at the graveside service for a Special Tribute. Visitation will be 5-7 p.m. Monday, March 2nd, at the church, with a 7:00 p.m. wake service. Reichmuth Funeral Home of Elkhorn, NE is in charge of arrangements. In lieu of flowers, memorials will be directed to Ashland Greenwood Wrestling Club or the MWC Wrestling Academy. Condolences to www.reichmuthfuneralhomes.com Ryan leaves to cherish his memory: his wife, Carrie; children Saige, Cira, Blaine, and Isaac all of Ashland, NE. Parents Randy and Janet Christo of Ashland, NE and Ronelle Christo and Tom Swanson of Yutan, NE. In-laws Gerald Reinhart of Albion and Peg and Bill Carter of Lincoln. Grandmother Kathryn Philmalee. Siblings Mitzi McCoy (Brooke, Bailey, Kristian, and Jordan) of Yutan and Michaela Christo (Audriona and Madison) of Columbus. In-law siblings Tate and Kim Wallin (Laila and Eli) of Omaha; Courtney and Vin Seufert (Ryder) of Gretna; Nick Reinhart and Christina Padanilam of Chicago, IL; Alex and Erin Reinhart (Lakyn and Dax) of Omaha; many aunts, uncles, cousins, other relatives, and many friends. He is preceded in death by grandparents Ronald Philmalee, Max and Jackie Christo, Ambrose and Marcella Reinhart, and Carroll and LaVonne Nygren and Uncle Kerry Philmalee. Please plan to join us at the graveside service for a Special Tribute.

In Lieu of flowers, memorials to the Ashland Greenwood Wrestling Club or the MWC Wrestling Academy In the 41 years he was given on earth, Ryan fully used his life to become many things to many people. A husband, father, son, brother, uncle,... View Obituary & Service Information

The family of Ryan M Christo created this Life Tributes page to make it easy to share your memories.

In Lieu of flowers, memorials to the Ashland Greenwood Wrestling...

Send flowers to the Christo family.