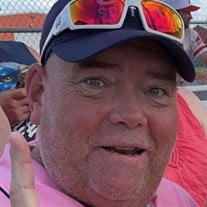 Ryan Gerald Willms 53 of Omaha, Nebraska entered into eternal rest on Saturday, July 31, 2021 at his home in Omaha. He was born June 11, 1968, in Columbus, Nebraska to Richard and Jeralyn (Wallace) Willms. Ryan graduated from Columbus High School in 1986. As a child growing up he loved playing baseball and at age of 9 started and went all the way through to Legion Ball. At the age of 10, on October 14, 1978 he won the punt pass and kick contest in Fremont, NE. After high school he joined the Army National Guard, from 1987 thru 1990. He moved along with his parents to Omaha, in the spring of 1990 and he got his first job at Payless Cashways and started playing slow pitch softball and that is where he met the love of his life Reva Fister. They were married on November 9, 1991, at South Omaha Church of God. Ryan’s first love was softball (especially slow pitch), which he umpired at almost all the fields in the Omaha and surrounding area for 25 years. His hobby was golfing in the summer; he hit a hole in one at the Tiburon Golf Course May 2013, and the highlight was getting to golf with pro, John Daly on 3 different occasions, when he was working with 84 Lumber. In the fall he loved to hunt deer in Albion, Nebraska, and in Tabor, Iowa. He was a friendly outgoing person and always knew what he wanted. Ryan is survived by the love of his life Reva Willms for almost 30 years; his two daughters: Brittany (Ryan) Steele of Lincoln, NE and Lindsay (Bryan Packett), and granddaughter Braelyn Packett all of Omaha; his parents Rich and Jeri Willms of Omaha; brother Rick (Debra) Willms of Omaha; his in-laws Rolland and Sonja Fister of Norfolk Nebraska; his beloved Godparents Larry and Marcia Janssen of Bennet, NE; Maren Schuster (Don) of Grand Jct. Colorado; Special “Sis” Janice and Special “Cuz” Suzy; many aunts, Uncles and cousins; nieces and nephews, and his SOFTBALL FAMILY; and a very special dog Roxy. He was preceded in death by his grandparents.

Ryan Gerald Willms 53 of Omaha, Nebraska entered into eternal rest on Saturday, July 31, 2021 at his home in Omaha. He was born June 11, 1968, in Columbus, Nebraska to Richard and Jeralyn (Wallace) Willms. Ryan graduated from Columbus High... View Obituary & Service Information

The family of Ryan Gerald Willms created this Life Tributes page to make it easy to share your memories.

Send flowers to the Willms family.