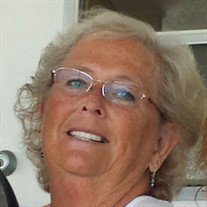 Sandra “Sandy” Kay Weberg, age 70 of Valley, NE, died at her home on Monday, October 19, 2020 with her family at her side from a long battle with Breast Cancer. 70 years of age by todays standards is considered a bit short, but Sandra did a lot within that time. She was born the daughter of Carroll and Irene (Barr) Boardman on December 25, 1949 in Denver, CO. Sandra graduated from Valley, NE High School in 1968. Sandra worked for Western Electric in Omaha for many years. On November 8, 1969, she was united in marriage to Earl Eugene Weberg, Jr and to this union, three children were born, Karen, who they lost when she was 9 months old, Jeremy and Julie. Her breast cancer battle started in 1997 with breast surgery with help of chemo-therapy, this first bout with cancer was stopped and she was considered cancer free. Unfortunately, the chemo damaged her heart and lungs and bother worsened as years passed. In 2018 she was having lung problems when a X-ray showed a spot on her lung and a spot on her liver. After testing, she was told the breast cancer was back and spread to the liver. They tried a milder chemo because of her heart and lung problems but it didn’t work. In early 2020, she battled with her lungs failing and was later placed in Hospice Care at her home, where she always wanted to be. Sandy and Earl enjoyed over 51 years of marriage. Sandra’s greatest joy in life was becoming a grandmother to Colton and Brantly. She always ended her good-byes to them with “Grandma Loves You”. Of course, there were many happy times in her life. The early vacations when the children were young, they include trips to Kansas City, Branson and Disney World. Then on her 25th wedding anniversary, she discovered “Cruising”, which then became a yearly vacation in the winter time. The many get-togethers with family and friends were one of her favorite things to do. She was planning to have a 50th wedding anniversary party in the spring of 2020 but the covid virus changed all of that. Sandy was very disappointed with that because of the chance to see her relatives and friends together in one place. She was preceded in death by: her parents, Carroll and Irene Boardman; and her daughter, Karen. Sandy is survived by her, husband, Earl of Valley, NE; son, Jeremy (Rene) Weberg of Fremont, NE; daughter, Julie (Brian) Hall and their sons, Colton and Brantly all of Bonita Springs, FL; sisters, Caryl (George) Beaver and Connie Boardman all of Valley, NE; and a brother, Ronald (Vicki) Boardman of Omaha, NE. The Weberg family would like to thank all of you who came and those who sent cards to offer prayers and condolences. She did not want a mournful funeral, but instead, wanted this to be a “Get-together” of relatives and old friends to talk and mingle with maybe a story or two about her life… a Celebration of her life! In closing, and in words from a phrase she would use at the end of her telephone conversations: “Love you and Miss you”. A Celebration of Sandy’s life will be held at 11 Am, Saturday, April 17, 2021 at the Reichmuth Funeral Home in Elkhorn with burial of her ashes to follow at the Prospect Hill Cemetery in Elkhorn.

Sandra &#8220;Sandy&#8221; Kay Weberg, age 70 of Valley, NE, died at her home on Monday, October 19, 2020 with her family at her side from a long battle with Breast Cancer. 70 years of age by todays standards is considered a bit short, but... View Obituary & Service Information

The family of Sandra Kay Weberg created this Life Tributes page to make it easy to share your memories.

Send flowers to the Weberg family.