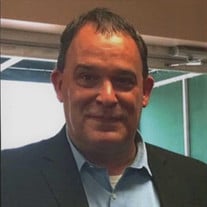 Live Streaming Scott's funeral is at DSOmaha.org then click on watch live Memorials to Special Olympics, Nebraska Scott Joseph Buscher was born to Chuck and Marty Buscher on July 17th, 1970 and was the third child, following older sisters Kris and Pam. Known as the family “Sunshine” Scott spent most of his childhood growing up on Ginger Cove in Valley, Nebraska where he enjoyed water skiing and anything that involved being out on the lake. “Small town” life in Valley was something he always held dear to his heart and he remained close friends with many of his classmates even as an adult. He excelled as an athlete and student at Valley High School, and took enormous pride in being a Terrier. He later met his loving wife of 29 years, Jenni Andersen Buscher of Elkhorn, and they married on February 16, 1991 at Bethany Lutheran Church in Elkhorn and he was a devoted and loving husband for all the days of his life. Scott then graduated in May of 1992 with a Bachelor’s degree in Business from the University of Nebraska-Lincoln. He and Jenni went on to have five children; Kelsey, Kyle, Taylor, Ryan, and Peyton and a lovable black lab named Samson and they resided in Omaha. Scott was a dedicated family man, and with much of his immediate family remaining in close proximity he loved spending time with everyone as often as he could. Much of his adulthood was spent driving between sporting events and practices for his children and he dedicated much of his time coaching various sports teams, which he thoroughly enjoyed. Sports were a driving force in his life, and the entire Buscher household, and he loved cheering on the Creighton basketball, Nebraska football, and Nebraska volleyball teams along with the teams of all of his kids. Over the past few years he became a Grandpa to his grandsons Aiden and Grayson, whom he adored and spoiled as only a grandparent could. Scott worked at Republic National Distributing Company for over 20 years and developed great friendships with many of his colleagues and customers. He held these relationships very dear to his heart and loved developing personal connections with them outside of work as well. Scott can most be remembered for being a genuine and caring man who was always willing to lend a hand to anyone that needed it. He was kind to everyone he met and treated everyone the same, no matter who they were. He was a strong man of God who never wavered in his faith, even in times of adversity. He lived a life to be proud of and one that was admired by everyone around him. Scott was called home to be with God on May 7th 2020 after a two week long battle following a devastating stroke. Those that knew him will miss him terribly, but we know that he was carried straight to heaven to fulfill his external life with Christ.

The family of Scott Joseph Buscher created this Life Tributes page to make it easy to share your memories.

Customized sympathy cards. Mailed for you.