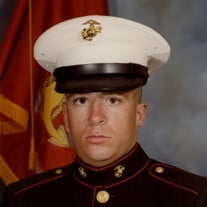 Sean Quinn, age 54 of Omaha, died on Monday, February 15, 2021 in Omaha. He was born the son of Wayne and Ruth (Mueller) Quinn on March 2, 1966 in Omaha, NE. He received an education at Westside High School before joining the Marine Corps and then pursuing a degree in electronics. He completed an electrician apprenticeship and worked as a journeyman wireman with IBEW for over 20 years. He was very passionate about sharing his craft and taught a variety of different courses within the apprenticeship program. He valued education and took a lot of pride in his work. He was a passionate man guided by a strong moral compass. A man who exhibited great commitment, he remembered his time in the Marine Corps fondly. He married Sandy Quinn in 1992 and raised two children, Michael and Sarah, during their 28 years marriage. In his free time, he loved Nebraska and Chicago sports. He was an avid hockey fan. He was especially close with his brother Matthew and with the help of their brother Michael they built the beautiful deck that sits in the back of the family home. He is preceded in death by his brother, Matthew who lays here in this same location. Sean will be greatly missed. He was preceded in death by: his mother, Ruth Quinn; and his brother, Matthew Quinn. Sean is survived by: his father, Wayne Quinn of Omaha; a son, Michael (Dinka) Quinn of Elkhorn; a daughter, Sarah Quinn of Omaha; siblings, Michael (Carol) Quinn of Omaha, Chris (Dave) Rice of Omaha, Jean Epps of Lincoln, NE, Karen Fetters of Omaha, Annette (John) Haynes of Pacifica, CA, Tim (Shiela) Quinn of Omaha, Colleen (Tom) Harper of Omaha, Rebecca Quinn of Omaha, and Andrew Quinn of Montclair, NJ. Graveside memorial service with full military honors will be held at 11 am, Saturday, June 12, 2021 at Prospect Hill Cemetery in Elkhorn. Reichmuth Funeral Home of Elkhorn, NE is caring for Sean and his family at this time. The family wishes that Memorials be made to the Wounded Warrior Project (woundedwarriorproject.org/) and can be left or mailed to the funeral home.

Sean Quinn, age 54 of Omaha, died on Monday, February 15, 2021 in Omaha. He was born the son of Wayne and Ruth (Mueller) Quinn on March 2, 1966 in Omaha, NE. He received an education at Westside High School before joining the Marine Corps and... View Obituary & Service Information

The family of Sean Patrick Quinn created this Life Tributes page to make it easy to share your memories.

Send flowers to the Quinn family.