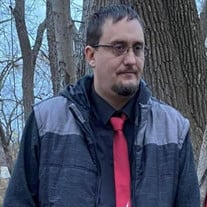 Seth Edward Peterson was born April 2, 1978 in Holdrege, Nebraska to Dennis and Marilyn “Mary” (Ewald) Peterson. He grew up in Bertrand, Nebraska, where he attended Bertrand Community Schools and graduated from Bertrand Community High School in 1996. After high school, Seth attended Dana College where he earned his Bachelor’s Degree in Social Work in 2000. Growing up, Seth was responsible for helping on the farm, and enjoyed Sci-Fi, especially Star Trek, and playing Nintendo. Seth married Angel Hamburger on September 6, 1998 at Bethany Lutheran Church in Elkhorn, Nebraska, and to this union, three children were born: Jana, Gage, and Ava “Arlo”. The family made their home in the Elkhorn/Omaha area. Seth was a hard worker, and in addition to helping on the farm through the years, he worked at The Mix, Maximus with the State of Nebraska, and for the past 20 years as a customer service manager with Marriott International. He was also active at Bethany Lutheran Church, volunteering for various activities, going on mission trips, and even playing Joseph in the church’s nativity play. Seth seemed to always find time to volunteer; and even in death he is still giving, as he is an organ and tissue donor. Seth was an avid reader, and if he wasn’t reading something new, he may be rereading one of his favorite books. He enjoyed playing Monopoly and dominoes, and was a fan of watching the Marvel movies with the kids. He cherished his family, and was proud of every moment with all of them; from the birth of the kids to Jana and Gage’s graduations and Arlo’s creativity, especially watching her dance, his sister’s wedding, and his siblings’ graduations, he was there for them all. Seth meant so much to so many. He was Papa P, even Santa Seth. The family wants you to know and remember that Seth is their heart, and their Iron Man, and they are proud to have shared him with everyone. Seth, I love you 3000, and thank you for being the “Happy” in our lives. Seth passed away unexpectedly on Wednesday, February 16, 2022 at Methodist Women’s Hospital in Omaha, Nebraska at the age of 43 years, 10 months, and 14 days. He was preceded in death by his mother Marilyn and grandparents Harold and Betty Peterson and James and Helen Ewald. Seth is survived by his wife Angel, and children: Jana, Gage, and Arlo; his father Dennis of Bertrand, NE, siblings: Jillian and Jacob Beard of Osage Beach, MO, Nathan of Bertrand, NE, and Lucas of Lincoln, NE; nephew and niece Henry and Jean Beard; uncles: David of Bellevue, NE, and John Paul Peterson of Central City, NE; parents-in-law Pamela and Robert Hamburger of Omaha, and brother-in-law Garin and Molly Hamburger, and their children Lilly and Fynley of Lithia, FL. Funeral service 11 AM Monday at Bethany Lutheran Church, Elkhorn. Visitation Sunday at Reichmuth Funeral Home, Elkhorn from Noon to 6 PM with family receiving friends from 4-6 PM. In lieu of flowers, memorials to the family for later designation.

The family of Seth Edward Peterson created this Life Tributes page to make it easy to share your memories.

Send flowers to the Peterson family.