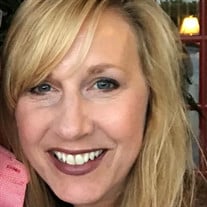 Shannon Rae Wallingford, 55, of Omaha, NE, went to be with her Lord and Savior Jesus Christ at home with her family by her side at 3:16 pm on Easter Sunday, April 17th, 2022. Visitation and gathering with the family will be from 6:00-8:00 pm on Thursday, April 21st at Christ Community Church in the chapel, located at 404 S 108th Ave in Omaha. A memorial service will be held the next day at 10:30 am, Friday, April 22nd in the main sanctuary at Christ Community Church. Arrangements are under the direction of Reichmuth Funeral Homes in Elkhorn, NE. Shannon was born on November 10, 1966, in Columbus, NE to Willard and Sharon (Went) Behlen. She grew up in rural Columbus and graduated from Lakeview High School in 1985. Shannon attended Wayne State College, graduating in 1989 with a Bachelor of Fine Arts in Music Education. On June 12, 1987, she was united in marriage to Scott Wallingford. In 2016, Shannon retired from teaching full time in the Elkhorn Public School System, to pursue her passion and favorite career as a professional grandmother. Guiding Shannon throughout her life was her faith in God. She found strength and courage in Christ and was never afraid to boldly share the Gospel Message with others. Shannon and Scott have three sons, Ben, Jacob and Caleb, who all grew up in Elkhorn, NE. She was a wonderful mother who never missed a chance to live and capture the great moments of her children’s lives. She loved to play with her children. Over the years, there were many games of football, basketball and baseball that she played with her boys in the yard. She would proudly declare that she was raising boys and not grass so the house and lawn work could wait! She was so very proud of her children and loved them more than life itself. Shannon has seven grandchildren and is affectionately referred to as their “Nanu”. Her grandchildren are the light of her life, and they absolutely adore her. She never misses a chance to spend time with them, playing, teaching and loving on them. Shannon is survived by her husband Scott Wallingford, her three sons; Ben (Taija) Wallingford, Jacob (Ashley) Wallingford and Caleb (Melody) Wallingford, her seven grandchildren; Aspen, Janie, Whitley, Roman, Cannon, Damian and Winnie Wallingford, her mother Sharon Behlen-May, her sister Stacy (Michael) Owens, her brothers Wade (Christine) Behlen, Ward (Dana) Behlen, her mother-in-law Donann Wallingford, her brother-in-law Don (Tina) Wallingford, five nieces and five nephews. Shannon is preceded in death by her father Willard Behlen, her father-in-law Larry Wallingford and her sister-in-law Lynn Egger. In lieu of flowers, condolences may be directed to the family for a memorial to be determined at a later date.

Shannon Rae Wallingford, 55, of Omaha, NE, went to be with her Lord and Savior Jesus Christ at home with her family by her side at 3:16 pm on Easter Sunday, April 17th, 2022. Visitation and gathering with the family will be from 6:00-8:00 pm... View Obituary & Service Information

The family of Shannon Rae Wallingford created this Life Tributes page to make it easy to share your memories.

Send flowers to the Wallingford family.