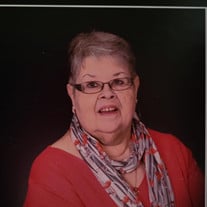 Memorials to the church or Elkhorn Historical Society; Sharon Rae Olivieri Dike was born on August 6, 1946 in North Platte, Nebraska to Joseph and Jean (Peters) Olivieri. She grew up in North Platte where she attended Cody Elementary before graduating from North Platte High School in 1964. As a young girl, Sharon was active in Glee Club and Job’s Daughters. Sharon married Lyle Dike on March 5, 1967 at the United Methodist Church in North Platte, Nebraska and they were blessed with two daughters: Toni Jo and Teri Le. Sharon and Lyle have made their home in North Platte, Millard and Elkhorn before moving to Omaha. Sharon has always been busy, working at A & W Root Beer, Gibson’s Discount Store, Majors Plastics, Inc, Elkhorn Public Schools as a bus and van driver, Dick’s Hillrise, Elkhorn Hills United Methodist Church and babysitting her grandchildren. She was active in Mrs. JC’s, EHUMC Women’s Group and the local Bunco Group. Sharon used her spare time to enjoy ceramics, bingo, sewing and crafting. She attended all activities involving her grandchildren and enjoyed beating everyone at marbles. In her later years she was also known for her "Mad Scooter Speed" which her Grandkids thoroughly enjoyed! Sharon’s eyes always told the story of what she was thinking. She had the ability to mix up phrases in the most hilarious ways that became stories for life. Sharon passed down her trait to laugh till we cry, sometimes at the worst times. She would “cheerlead” the family through any situation. Sharon was beautiful, loving, kind, proud and often stubborn. Her great joys came from family events: weddings, births and especially grandchildren. Sharon loved bright colors, was an avid husker fan and savored taco salad, popcorn and homemade ice cream and washed it down with a cold Diet Pepsi. She was often seen responding with “whatever” followed by an eye roll and head toss. Sharon passed away on Tuesday, May 11, 2021 at the Methodist Hospital in Omaha, Nebraska at the age of 74 years, 9 months and 5 days. She was preceded in death by her parents Joseph and Jean and in-laws Carl and Hazel Dike. Sharon is survived by her husband Lyle of Omaha; daughters Toni (Neil) Wilson of Crescent, IA and Teri (Doug) Tillman of Omaha; grandchildren Carlie and Leah Wilson and Madilyn and Isaac Tillman; and Special Long-Time Sister-Friends, Phylis Garner, Paulette Swarthout and Lois Thomas.

Memorials to the church or Elkhorn Historical Society; Sharon Rae Olivieri Dike was born on August 6, 1946 in North Platte, Nebraska to Joseph and Jean (Peters) Olivieri. She grew up in North Platte where she attended Cody Elementary before... View Obituary & Service Information

The family of Sharon Rae Dike created this Life Tributes page to make it easy to share your memories.

Memorials to the church or Elkhorn Historical Society;

Send flowers to the Dike family.