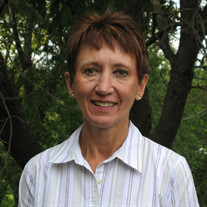 Sharon Ann (Jensen) Freeman passed away peacefully on October 14th, 2021, at her home in Elkhorn, after a long battle with ALS. She was born May, 28th, 1954 to Norman and MaryLee Jensen of Laurel, NE. Sharon graduated from Laurel High School in 1972, then obtained her certificate in Dental Assisting in Omaha, NE. Sharon was united into marriage with Robert Freeman on June 23, 1973 at St. Anne’s Catholic Church in Dixon, NE. Together they raised their family, Jason, Melissa, and Brandi in Elkhorn, NE. Sharon worked as a dental assistant for 10 years in the Omaha area, until she opened up her in-home daycare. She ran ‘Sharon’s Wee Care’ for 25 years until the progression of ALS took away her ability to care for the children. Sharon was diagnosed with ALS in November of 2006. In November of 2008, Sharon was placed on a ventilator. During this time, Sharon remained involved with all of the family activities. She woke up every morning with a smile on her face. She had an everlasting light of hope and fight in her. She controlled her care, and her family advocated for the best care. ALS eventually took Sharon’s life. Besides spending time with her family and friends, Sharon had a love for the great outdoors. Some of her favorite pastimes included camping, boating, floating in the pool or the lake, planting flowers, doing outside work. Listening to music was a part of her daily life. She enjoyed a good daiquiri, Kevin Costner and saying “Oh s**t”. She liked staying busy and keeping the house in tip top shape. She had many skills which included sewing, cooking, and baking. She had a heart of gold and loved her family with every ounce of her. She was the most amazing wife, mother, daughter, sister, aunt and friend. Sharon was preceded in death by father, Norman Jensen; brother, Monte Jensen; and grandparents, Leo and Ferne Garvin. Sharon is survived by her loving husband, Rob Freeman; children: Jason (Angel) Freeman, Melissa (William) Turner, and Brandi (Craig) Philbrick; 7 grandchildren: Trevor Hayden, Tyson Philbrick, Maddox Philbrick, Bentley Philbrick, Kate Fry, Rebecca Freeman, Jessica Freeman; mother: MaryLee Jensen; and sister: Deb Nobbe (Andy Tisthammer). VISITATION: 5-7pm Tuesday October 19th at Reichmuth Funeral Home with Wake Service beginning at 7pm. MEMORIAL MASS: 10:30am Wednesday October 20th at St. John the Evangelist’s Catholic Church in Valley, NE. INURNMENT: Prospect Hill Cemetery. Memorials to ALS in the Heartland or ALS Association Mid America Chapter.

Sharon Ann (Jensen) Freeman passed away peacefully on October 14th, 2021, at her home in Elkhorn, after a long battle with ALS. She was born May, 28th, 1954 to Norman and MaryLee Jensen of Laurel, NE. Sharon graduated from Laurel High School... View Obituary & Service Information

The family of Sharon Ann Freeman created this Life Tributes page to make it easy to share your memories.

Send flowers to the Freeman family.