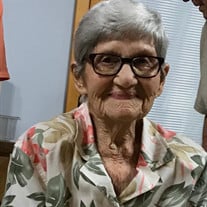 Shirley Bevington, age 100 of Valley, NE passed away at her home in Valley on February 11, 2020. Shirley Rosamond (Rosengrant) Bevington was born July 28, 1919 to Ward and Edith (Stewart) Rosengrant near Garden Grove, Decatur County, Iowa. In 1930, the family moved to Whitney, Nebraska where her father wheat farmed. She attended school in Whitney until 11th grade when they moved to Poplar Bluff, MO. Shirley graduated from Poplar Bluff High School in 1938. On January 4, 1939, she married Frank Bevington in Corning, Arkansas. They were blessed with two sons, Gail and Roger. The family moved to Nebraska in 1947, and lived in Beatrice, Fairbury, and Swanton until finally settling in Valley, where Shirley lived for the next 70 years. She was a loving mother to all of her family. Shirley was preceded in death by her parents, husband Frank, and brothers Blaine and Basil. She is survived by sons Gail (Kay) of Fremont and Roger (Bonnie) of Valley, 9 grandchildren, 23 great grandchildren, and 9 great great grandchildren, sister Beverly Davis of Chillicothe, MO, and many nieces and nephews. A Memorial service will be held at 2 PM Sunday, February 16, 2020 at Reichmuth Funeral Home in Elkhorn with visitation one hour prior to the service. Inurnment will be at Prospect Hill Cemetery, Elkhorn. Memorials can be made to Valley American Legion Post #58 or Wounded Warrior Project.

The family of Shirley Rosamond Bevington created this Life Tributes page to make it easy to share your memories.

Shirley Bevington, age 100 of Valley, NE passed away at her home...

Send flowers to the Bevington family.