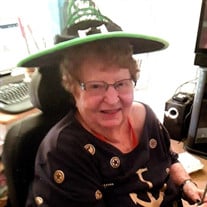 Shirley Mae was born February 7, 1933 in Pender, Nebraska, the first and only child to Elmer and Zabie (Everett) Jensen. She spent the entirety of her childhood in Emerson, Nebraska, graduating from Emerson High School with her beloved class of 1950. As a child, she enjoyed music, dancing, twirling the baton, and making lifelong friends. Shirley earned her two-year teaching degree from Wayne State College, and moved to Hooper, Nebraska where she was an elementary classroom teacher. She later returned home where she worked as a 4th and 5th grade teacher for South Sioux City Schools and then a secretary for Emerson Schools. Shirley married Robert Willis Blaker on October 8, 1954 at First Lutheran Church in South Sioux City, Nebraska, and to this union three sons were born: Bill, Scott, and Jay. Bob and Shirley raised their family in Emerson before moving to Elkhorn, Nebraska in 1995. Shirley assisted in the operation of Bob’s family business, Blaker Produce, keeping the books and steering the company successfully through financial hardship. Later, when Bob was injured while working for Iowa Beef Processors, Shirley became both caregiver and breadwinner, returning to work for Emerson Elementary as a secretary and later as secretary to the superintendent and Emerson’s school board. As Bob recovered, they started their own business, Tri-Ag Products, a livestock nutritional supplement company which prospered and eventually sold in 1993. Once she and Bob moved to Elkhorn, she continued her work as payroll clerk for Elkhorn Public Schools until she retired in 1998. Shirley loved to travel, especially after Bob passed in 2007. She enjoyed taking cruises but didn’t mind the occasional jaunt to Vegas or Hawaii, or even just exploring towns and cities within driving distance. She was active in several organizations through the years, including Eastern Star, Daughters of the Nile, and St Luke’s Lutheran Church in Emerson. Her talents shone as cub scout Den Mother, often writing her own skits and songs for the boys, and as member/director for St Luke’s Church choir. She even penned the lyrics to her alma mater’s fight song – “Cheer! Cheer! For Purple and Gold!” Her passions were strong and life-long: Husker football, Boston Terriers, puzzle books, margaritas, and the color turquoise. Through the good times and bad, she held strong to her faith and her family. She loved her Lord, her neighbors, her Glory Girls bible study group, her caregivers, her family, and most of all her grandkids with all her heart. Which is saying quite a lot. Shirley passed away peacefully on Thursday, February 4, 2021 at Brighton Gardens in Omaha, Nebraska at the age of 87 years, 11 months, and 29 days. She was preceded in death by her husband Bob, and her parents, Elmer and Zabie. Shirley is survived by her sons and daughters-in-law Bill and Jenny of Elkhorn, Scott and Carol of Florence SC, and Jay and Annie of Omaha; and eight grandchildren: Paige, Danny, Walt, Noah, Taylor, Alaina, Adam and Cicily. Funeral services will be held at 11 am, Tuesday, February 9, 2021 at Bethany Lutheran Church in Elkhorn with Mike Thomas officiating and the service will be webcasted on the funeral home website, on Shirley’s obituary page. Burial will follow at the Prospect Hill Cemetery in Elkhorn. Visitation will be held on Monday February 8, 2021 from 4 pm until 6 pm at Reichmuth Funeral Home in Elkhorn. Memorials can be made to either St. Luke’s Lutheran Church in Emerson, NE or Bethany Lutheran Church in Elkhorn, NE and can be mailed or left at the funeral home.

Shirley Mae was born February 7, 1933 in Pender, Nebraska, the first and only child to Elmer and Zabie (Everett) Jensen. She spent the entirety of her childhood in Emerson, Nebraska, graduating from Emerson High School with her beloved class... View Obituary & Service Information

The family of Shirley Mae Blaker created this Life Tributes page to make it easy to share your memories.

Send flowers to the Blaker family.