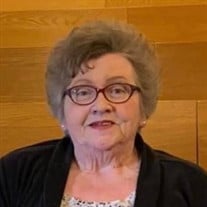 Shirley Jean Krummel Fritz was born on April 21, 1945 in Avoca, Iowa to Rhinhardt and Hilda (Rock) Krummel. She grew up on the family farm, where it was her job to feed the chickens, something she thoroughly disliked. Shirley attended school in Avoca and graduated from Avoca High School in 1963. As a young girl, Shirley enjoyed playing with paper dolls; was active in 4-H and enjoyed church trips. Shirley graduated from the Jennie Edmundson School of Nursing as a Registered Nurse on March 13, 1966, she later returned to school at UNO to receive her Bachelor’s Degree in Nursing. Shirley married Earl “Bud” Lang on October 22, 1966 at Trinity Lutheran church in Avoca, Iowa and they were blessed with two sons: Greg and Chris. Shirley later married Ernie Fritz on May 29, 1993 at their home in Elkhorn Nebraska. Shirley called several towns home in Iowa before moving to Omaha in 1990, then Elkhorn before returning to Council Bluffs after Ernie passed away. Shirley worked in nursing at the Iowa Veterans Home in Marshalltown, Jennie Edmonson in Council Bluffs, and retired from Veteran’s Hospital in Omaha. She enjoyed travelling, dancing, playing cards and board games but she treasured family functions. Shirley was a hard-working single mom with a good sense of humor and an out-going, caring personality. She enjoyed 50’s music, TV game shows and Sudoku puzzles. Shirley savored anything sweet (especially Carrot Cake), a cold diet coke and eating out, one of her favorites was Caniglia’s. Shirley passed away on Monday, August 3, 2020 at the Oakland Manor in Oakland, Iowa at the age of 75 years, 3 months and 14 days. She was preceded in death by her parents Rhinhardt and Hilda, Husband Ernie and siblings Myrna, Delbert and Willis, a step daughter Jennie Fritz and granddaughter Marisha Kay Meier. Shirley is survived by sons Greg (Kim) Lang of Council Bluffs, IA and Chris (Sara) Lang of Carlisle, IA; step-children Chris Fritz of Omaha, Mary (John) Timms of Berthoud, CO and Laura Fritz in Blair NE, Mark Meier (Jennie) of Fremont NE; sister Bonnie Kardell of Avoca, IA; 14 grandchildren and 5 Great grandchildren;

Shirley Jean Krummel Fritz was born on April 21, 1945 in Avoca, Iowa to Rhinhardt and Hilda (Rock) Krummel. She grew up on the family farm, where it was her job to feed the chickens, something she thoroughly disliked. Shirley attended school... View Obituary & Service Information

The family of Shirley Jean Fritz created this Life Tributes page to make it easy to share your memories.

Send flowers to the Fritz family.