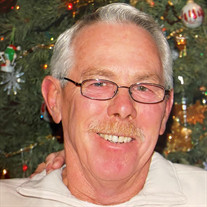 Flowers may be delivered to the Country Club on Tuesday. Cards may be mailed to the funeral home, in care of the Terry Thompson family. Terry Lee Thompson grew up in Omaha by Miller Park along with three other siblings. Terry played little league baseball with his brother Dan from sun up to sundown and played a championship game in Rosenblatt stadium. Terry loved to take things apart to make something for himself. It was usually his sister Deb’s things. Turning roller skates into a skateboard, and the taps from her tap shoes into cleats for his own shoes. He stayed busy keeping his brother Ron in line from a young age. He found a love for old vehicles, watching and learning from his uncle Bob. He cherished his 1948 chevy when he turned 16. Terry eventually worked for his dad in the carpet business for Nebraska Furniture Mart. One of Terry’s responsibilities was picking up Mrs. B and taking her to and from work. Terry eventually enlisted in the Marine Corp and served in Vietnam. During his service, Terry was shot multiple times and received the purple heart. After Vietnam, Terry received an education grant and went to trade school to become a mason. Terry and Jean were married on April 9th, 1983. They had four sons; Jeremiah, Josh, Jake, and Matt. Terry had a daughter, Mandy. They met in Omaha while Terry was doing a chimney repair job for Jean. After finishing the job Terry and Jean enjoyed a couple beers on the front porch of Jean’s house. It was at that moment that Terry said he knew his two loves aligned: His love for masonry and his love of his life. The two of them started Thompson Masonry in 1992. With four boys, it was obvious from the start that they wanted to be just like their Dad. They enjoyed working for the business at a very young age. It was through hard work, respect, and a passion for success that was instilled by Terry that allowed the boys to grow the business into what it is today. Thanks to their hard work, Terry was able to retire earlier than he expected and enjoy more time for family, friends, and hobbies. Throughout Terry’s adult life, he enjoyed hunting pheasant, quail, and deer. He spent time golfing and fishing with his buddies, Billy and Greg. Annual trips with his sons to the Husker games was always one of his most prized memories. Terry cherished time with family, friends, and especially his fifteen grandchildren and two great grandsons. Family always came first over anything else. He never missed his boys’ games unless they were playing at the same time. The front porch was Terry’s favorite spot. You could find him there at 5:00am with his cup of coffee watching the sun rise, and again in the evening with a Coors light in hand, visiting with family and friends. Anyone who came to visit immediately felt welcomed. Terry’s outlook on life was to not sweat the little things. Terry was always positive, with a calming demeanor, and a zest for life. He made sure to hassle his friends, always having that smart ass comment to make everyone laugh. Everyone he spent time with left their visit with a smile, knowing how important they were to him. He made a positive impact on everyone he loved. His greatest legacy will always be his Family. Family First, Always. Terry Lee Thompson was born in Omaha, Nebraska June 16, 1950 to Dale and Mary (Zarek) Thompson. He was preceded in death by his parents Dale and Mary Thompson and parents-in-law Ralph and Betty Schindler. Terry is survived by his wife, Jean, sons and daughters-in-law Jeremiah & Rena, Josh & Christy, Jake & Katie, and Matt & Kaela, all of Yutan, Robert & Anna Rosendahl of Sweden, daughter and son-in-law Amanda & Scott Giles of Omaha, grandchildren; Leah, Eli, Clint, Jeremiah Jr., Klara, Joel, Taylor, Drew, Mason, Ebba, Kori & Tyler, Andrew & Martha, Hunter, and Emerson, great grandsons Felix and Edwin, brothers Dan (Karen), Ron (Marcy), and sister Deb (Jim) Muellner. A gathering will be held for family and friends from 5-8 PM Tuesday at the Yutan Veterans Country Club, with military honors to be held at 5 PM. Private interment at a later date.

Flowers may be delivered to the Country Club on Tuesday. Cards may be mailed to the funeral home, in care of the Terry Thompson family. Terry Lee Thompson grew up in Omaha by Miller Park along with three other siblings. Terry played little... View Obituary & Service Information

The family of Terry Lee Thompson created this Life Tributes page to make it easy to share your memories.

Flowers may be delivered to the Country Club on Tuesday. Cards...

Send flowers to the Thompson family.