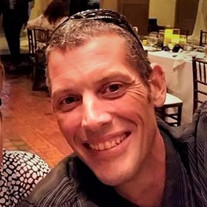 Memorials to the family for the children’s education fund; Thomas Michael Smith, II was born on December 3, 1973 in Omaha, Nebraska to Thomas and Barbara (Barrett) Smith. Tom grew up in Omaha where he attended at St Pius/St.Leo Catholic School and the Omaha Public school district. As a young boy, Tom was mischievous, a fantastic hockey player and loved to skateboard. He was known to sing “New York, New York” at the top of his lungs in the shower. Tom has been blessed with two children: Tanner and Taylor and they have made their home in Omaha. Tommy overcame many struggles as he matured into an adult. The past several years he successfully navigated through his responsibilities and demonstrated to his children what it means to be a loving contributing member of society and a family. He enjoyed a simple life and had various interests – movies, music, his favorite sports teams – the Nebraska Huskers and the Colorado Avalanche Hockey team and his beloved dog, Max. He was extremely creative – woodworking, painting, landscaping, and refurbishing furniture. Tommy had a quiet and reserved demeanor and was extremely thoughtful. He always gave everyone in his family unique and thoughtful gifts for birthdays and holidays. He would do anything for anyone at a moment’s notice. Most of all, he loved his children dearly. They were the most important thing in his world. Early in their life, he learned to be a hands-on Dad who juggled the responsibilities of working, caregiving, and nurturing both children. He was not foreign to bottles, diapers, bath time and bedtime. He embraced the role to the best of his ability and proudly presented his kids to the world. He made it a point to take each kid to their first Husker game. Working hard to make each a memorable experience. Tanner and Taylor fondly recall times when their Dad would make cookies with them and take them on late night runs for Quickie Mart treats. Tom worked at Omaha Glass Pro as a technician doing glass and auto repair and restoration. He absolutely loved his job. His boss described Tommy as a solid employee. Dedicated, hardworking, and focused. A good co-worker. Compliant and tolerant. Did what it took to get the job done, without complaint. Thomas sustained fatal injuries resulting from a car and pedestrian accident on Oct. 18,2019 in Omaha, Nebraska. He is preceded in death by his Godfather Jack Stessman and Uncles John W. Smith and Robert H. Barrett. Tom is mourned deeply by his two children, Tanner and Taylor; parents, Thomas M. and Barbara E. (Barrett) Smith; siblings and nephews, Lisa Smith, Rosemary Smith, and Joshua Smith, Jennifer (Smith) Stine, and Charles, and Oscar Stine; aunts and uncles; Virginia Smith, Rosemarie Sheehan, Mary Lou Smith, Mark and Jody Barrett, and Mike Barrett; and Godmother, Kathryn (Keeto) Stessman. His beloved dog, Max.

Memorials to the family for the children&#8217;s education fund; Thomas Michael Smith, II was born on December 3, 1973 in Omaha, Nebraska to Thomas and Barbara (Barrett) Smith. Tom grew up in Omaha where he attended at St Pius/St.Leo Catholic... View Obituary & Service Information

The family of Thomas Michael Smith, II created this Life Tributes page to make it easy to share your memories.

Memorials to the family for the children’s education fund;