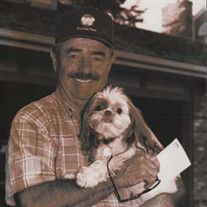 Memorials to Alzheimer's Association Thomas Joseph Wallace was born on November 25, 1932 in Winterset, Iowa to Clayton and Hilda (Sheehan) Wallace. He grew up on a farm near Winterset where he attended grade school and graduated from Winterset High School in 1951. As a young boy, Tom enjoyed playing football but as a farm kid much of his time was spent helping with chores and it was here that Tom learned about machinery and how to fix most anything. Tom enlisted in the United States Air Force in December of 1951 and served his country for 4 years. He spent a year deployed in Japan. Tom married Vergene on August 3, 1985 in Omaha, Nebraska. Tom worked for HDR and Griffin Pipe Company before starting his own fabrication company, Foundry Services. He enjoyed restoring old John Deere Tractors and Fire Trucks, playing golf, hunting and fishing, although it was more about the comradery than the fishing. Tom was a long-time member of the Cosmopolitan Club in Omaha, serving in many offices locally and receiving International accolades for his dedication to the organization. Tom could be the life of the party, was an avid husker fan and enjoyed reading and watching NASCAR. Tom had modified his riding lawn mower to eliminate most every safety feature on the machine, which often would create problems. He was one to always give a “full detail” answer to your question followed by “I have already told you more than I know”. Tom passed away on Thursday, May 14, 2020 at Marquis Place in Elkhorn, Nebraska at the age of 87 years, 5 months and 19 days. He was preceded in death by his parents Clayton and Hilda, son Scott and sisters Kathy and Rosemary. Tom is survived by wife Vergene; daughter Connie (Clyde) Marker and son Michael Wallace all of Florida; step-daughters Kim (Dean) Pegg of Kearney, NE and Holly (Tim) Nockels of Texas; 7 grandchildren and 2 great grandchildren; siblings Jack (Jean) of Florida, Jim of Texas, Gene (Katherine) of California and Teresa Casraiss of Maryland.

Memorials to Alzheimer's Association Thomas Joseph Wallace was born on November 25, 1932 in Winterset, Iowa to Clayton and Hilda (Sheehan) Wallace. He grew up on a farm near Winterset where he attended grade school and graduated from Winterset... View Obituary & Service Information

The family of Thomas Joseph Wallace created this Life Tributes page to make it easy to share your memories.

Send flowers to the Wallace family.