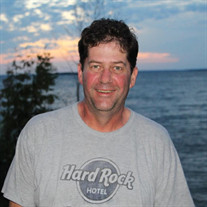 Tom was born on June 12, 1963 in Elgin, Illinois. He lived in the suburbs of Chicago until age 8, when he moved to Omaha, Nebraska with his mother, brother, and sister. He continued to visit his father in Illinois during the summer months. His father remarried and had a son. Tom loved to go camping and fishing with his younger brother, and kept that tradition of yearly, family, camping trips to Door County, Wisconsin, throughout his adult life until the last few years. As Tom got older, he loved motor cross racing and sailing. He attended Westside High School and graduated in 1981 and furthered his education at Southeast Community College in Milford. He graduated from Southeast in 1984. He became a tool and die maker and was hired by AT&T, which later became Connectivity Solutions. After many unexpected twists and turns in the road of life, it was there that he met the love of his life, Linda, in 2004. Eventually, they combined their families, his three children and her two. He attended all their activities and was a very loving and supportive father. Tom was a diligent worker, but was forced to find another job when the factory closed in 2010. He had a few more jobs, leading to the discovery for the need of a double bi-pass at age 48. He made a full recovery and began working at Novartis in Lincoln for two years, until he was offered a job closer to home at Kellogg’s. He enjoyed each and every job along the way, meeting new co-workers, many who remained close friends. In the latter part of his employment at Kellogg’s, he noticed a difficulty with the function of his hands. After numerous doctor appointments, he was finally diagnosed with ALS (Lou Gehrig’s Disease) in June of 2016. Following the devastating news, he continued to work as long as physically possible, knowing he would never get to enjoy his plans for retiring someday. Slowly over the years, he lost the use of his legs, his voice, his arms, his hands, and finally the ability to breathe without the aid of a machine, but he never gave up hope for a cure. He lived each day with courage and strength and somehow kept his sense of humor. He dearly loved his family, his three little doggies and his loving wife, who devoted herself to his care until the end. He touched the lives of everyone he met, especially those in the medical field that walked this journey with him. He was truly an inspiration. Tom is preceded in death by father, John P. White; mother, Virginia and step-father, Paul Thomsen; sister-in-law, Denise White. Survived by his loving wife, Linda D. White; children, Garith White, Matthew White, Jessi (Bronson) Marsh, Brandon Book, Kayla (Conor) Schnell; Granddaughters, Savannah White, Penelope White; sister, Holly (Myron) Peterson; brothers, Roger White, Randy (Katie) White; Stepmother, Linda K. White; brothers-in-law, Don (Sharron) Warner, Larry (Patty) Warner; sisters-in-law, Diana (Bill) Hutcheson, Cheryl (Dave) Japp; nieces, nephews, extended family and friends. A memorial scholarship in his name will be later established for a trade school.

Tom was born on June 12, 1963 in Elgin, Illinois. He lived in the suburbs of Chicago until age 8, when he moved to Omaha, Nebraska with his mother, brother, and sister. He continued to visit his father in Illinois during the summer months.... View Obituary & Service Information

The family of Thomas Matthew White created this Life Tributes page to make it easy to share your memories.

Send flowers to the White family.