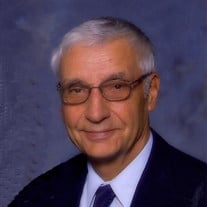 Memorials to Our Savior’s Baptist Church in Elkhorn or Westside Baptist in Omaha. Thomas Lewis Wollen was born on April 29, 1936 at home in Washington, Nebraska to Lewis and Nellie (Hultgren) Wollen. He was a graduate of Valley High School and a long-time Elkhorn resident. Tom married Valerie Christensen on August 3, 1956 at the Fremont Congregational Church and they were blessed with four children: Julie, Jonathan, Janet and Jennifer. They celebrated their 60th Wedding Anniversary with their children, grandchildren and great grandchildren at a church camp. Tom worked in sheet metal for many years at Waldingers. The Wollens’ owned and operated the Elkhorn Laundromat and Wollen’s Cleaners until retiring. In his free time, Tom enjoyed working on his farmland, participating in car shows and he loved to follow the markets. Tom and Valerie enjoyed their travels greatly. Highlights included trips to China, Israel, England, Ireland and American trips to the New York 1964 World’s Fair and the obligatory 2 week family road trip to the East Coast in 1976! Tom was a founding member of Our Savior’s Baptist Church in Elkhorn and was also long time attender of Westside Baptist in Omaha. Tom passed away peacefully at his home in Elkhorn on November 7, 2020, with his family by his side, at the age of 84 years, 9 months and 9 days. He was preceded in death by his parents Lewis and Nellie and sisters Jean Swanson and Rosalee Escobedo. Tom is survived by his wife Valerie; children Dr. Julie (Dr. Daniel) Stevens of Ord, Nebraska, Jonathan (Julie) Wollen of Kingman, Kansas, Janet (John) Morgan of Coweta, Oklahoma and Jennifer (John) Oliver of Waterloo, Nebraska; 13 grandchildren are: Stevens: Elizabeth Huseman, Abby Ford, Danny, Benny and Tommy. Wollens: Jared, Susan Thomas and Kristen Schrag; Morgans: Daniel and Matthew. Olivers: Andrew, Adelene and Adam. Tom was blessed with 14 great grandchildren.

Memorials to Our Savior&#8217;s Baptist Church in Elkhorn or Westside Baptist in Omaha. Thomas Lewis Wollen was born on April 29, 1936 at home in Washington, Nebraska to Lewis and Nellie (Hultgren) Wollen. He was a graduate of Valley High... View Obituary & Service Information

The family of Thomas Lewis Wollen created this Life Tributes page to make it easy to share your memories.

Memorials to Our Savior’s Baptist Church in Elkhorn or Westside...

Send flowers to the Wollen family.