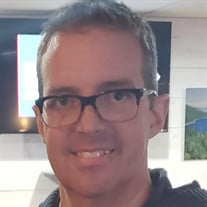 In Lieu of flowers, Memorials to a college fund for his children. Timothy Daniel Jensen was born on December 31, 1979 in Omaha, Nebraska to Dan and Cheryl (Gleason) Jensen. He grew up in Valley where he attended grade school and graduated from Valley High School in 1998. As a young boy, Tim enjoyed being outside, riding his bike, playing golf and baseball. His passion was the 4th of July, complete with all of the fireworks and the celebrations that went with it. Upon graduation, Tim enlisted in the United States Army and trained as a tank specialist. Tim married Courtney Troy on May 21, 2005 in Valley, Nebraska and they were blessed with two children: Bryar Rae and Dierks Timothy. They raised their family in Waterloo, Gretna and Valley. After Tim’s service to our country, he became a talented cabinet maker and more recently worked in production management at Fast Signs and then Revolution Wraps. He loved to work with his hands and create things. Tim loved to golf, go camping, coach the kids and be involved in all of their activities. He was a kind and caring man with an easy smile and when life became a challenge, he fought back with bravery and strength. He was an avid Husker fan and treasured time with his family. Tim savored foods of all kinds, a good vodka and soda with a lemon twist and dinner out at Farmer Brown’s. Tim was diagnosed with and started treatment for Non-Hodgkin’s Lymphoma in December 2016. After two years of traditional treatment methods, Tim sought out a solution for a more prolonged remission. Tim began his stem cell transplant journey in December 2018, and with Corissa’s donor cells fully accepted into his blood, Tim finally received his cancer free milestone in March of 2018. The expected side effects from the transplant were many and varied. Through every set back Tim remained positive, appreciative and focused on the ultimate goal, to remain cancer free to watch his beautiful children grow up. Tim passed away peacefully surrounded by family on Tuesday, December 24, 2019 at Nebraska Medicine in Omaha, Nebraska, just 7 days short of his 40th birthday. Tim is survived by daughter Bryar and son Dierks; father Dan (Cheryl) Jensen; Mother Cheryl (Bob) Danielson; siblings Jeff (Juliet) Jensen; Corissa (Eric) Hays; nieces Alexandra and Sydney; nephews Gus, Caden, Spencer, Drew, and Eli; aunts, uncles, cousins, and many friends. In honor of Tim, please consider joining the Be the Match registry. For more information go to www.bethematch.org. You could be somebody’s cure.

In Lieu of flowers, Memorials to a college fund for his children. Timothy Daniel Jensen was born on December 31, 1979 in Omaha, Nebraska to Dan and Cheryl (Gleason) Jensen. He grew up in Valley where he attended grade school and graduated... View Obituary & Service Information

The family of Timothy Daniel Jensen created this Life Tributes page to make it easy to share your memories.

In Lieu of flowers, Memorials to a college fund for his children....

Send flowers to the Jensen family.