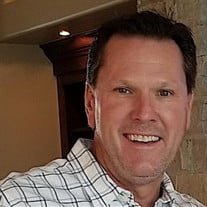 Timothy Lewis “Tim” McArdle was born February 18, 1967 in Omaha, Nebraska to Robert and Betty (Willms) McArdle. Tim grew up along with his four siblings in Elkhorn where he attended school, graduating from Elkhorn High School in 1985. Growing up, Tim participated in every sport all through high school, but he excelled at baseball and basketball. Tim married his high school sweetheart, Ranae Sass at St. John’s Lutheran Church in Bennington, Nebraska on June 24, 1988, and the couple was blessed with two daughters; Cortney and Caitlin. They raised their family on Tim’s family acreage north of Elkhorn for 27 years, then moved to the Silverleaf Development in Elkhorn for the past 7 years. Tim worked for the family business, McArdle Grading, for nearly 40 years. He was active in every facet of the business, and was proud of helping to grow the business into the well-respected construction company it continues to be today. Tim will be remembered as a selfless, loyal, loving man with an amazing sense of humor and enduring sense of pride in EVERYTHING he did. He loved the construction business, but when he wasn’t working, he enjoyed travel with family and friends, working in his yard, or watching sports. Tim was the type of guy that would drop whatever he was doing to help anyone in need. He loved his family unconditionally, and cherished his two granddaughters, who were truly the lights in his life! Tim passed away unexpectedly on Wednesday, April 27, 2022 at Methodist Women’s Hospital in Elkhorn, Nebraska at the age of 55 years, 2 months, and 9 days. He was preceded in death by his parents Robert “Scoop” and Elizabeth “Betty” McArdle and his mother-in-law Judy Sass. Tim is survived by his wife Ranae, daughters and sons-in-law Cortney and Alex Dye, and Caitlin and Matt Marshall, 2 granddaughters Olivia and Maya Dye, brothers and sisters-in-law Brad and Patti, Murray and Kathy, Kevin and Janine, and sister and brother-in-law Jill and Gary Uleman, sister-in-law Dawn Donahue, father-in-law Ken Sass, and many nieces and nephews. Funeral service 10:30 AM Saturday, Lutheran Church of the Master, West Campus, 1200 North 181st Court, Elkhorn, NE 68022. Visitation at Reichmuth Funeral Home, Elkhorn, Friday from 2-8 PM with the family receiving friends from 5-8 PM. In lieu of flowers, memorials to the Elkhorn Public Schools Foundation in honor of Tim McArdle. Private burial at Prospect Hill Cemetery of Elkhorn.

Timothy Lewis &#8220;Tim&#8221; McArdle was born February 18, 1967 in Omaha, Nebraska to Robert and Betty (Willms) McArdle. Tim grew up along with his four siblings in Elkhorn where he attended school, graduating from Elkhorn High School in... View Obituary & Service Information

The family of Timothy Lewis McArdle created this Life Tributes page to make it easy to share your memories.

Send flowers to the McArdle family.