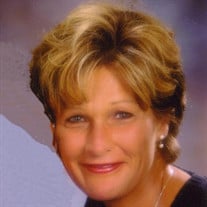 In Lieu of flowers, memorials to Endless Journey Hospice ; Vicky Lynn Austin Shaver was born on March 25, 1958 in Mason City, Iowa to Charles and VerLynn (Ouverson) Austin. She grew up in Des Moines, Iowa where she attended Clive grade school and graduated from Valley High in West Des Moines. As a young girl, Vicky enjoyed spending time during the summer with her grandparents, golfing, lake swimming, attending concerts and listening to music with her friends, sewing, baking and shopping. Vicky married Thomas Arthur Shaver on September 4, 1976 at West Des Moines United Methodist Church and they were blessed with three children: Frances Ann, Kathryn Lynn and Charles William and have made their home in Elkhorn, Nebraska. Vicky was vice-president of Shaver Decorating, Inc, their family owned business in Elkhorn, Nebraska. As a loving wife and mother, she enjoyed cooking and baking for her family, decorating their Omaha and Okoboji homes. Vicky was active in her flower garden, golfing, bowling, softball and boating. She was active in church and her bible study groups at Westside and Stonebridge churches. Vicky cherished many life events that the Lord provided for her and there is one common thread in those events: FAMILY. She was loving, caring, kind, strong and a great listener. Vicky was an avid fan of the music of Paul McCartney and Elton John, attending live concerts of each performer. She followed Charlie’s sporting events faithfully. Vicky savored a dinner of Scallops, Stuffed Crab or Chicken Club Salad, a glass of Cabernet and dinner out at Maxwell’s and The Ritz in Okoboji. She possessed a calm personality, hence “a great listener” and she built strong relationships with both family and friends. Vicky collected and decorated her homes with beautiful angels and crosses. Vicky was a woman of great faith, some of her favorite passages in the Bible were: Corinthians 1 and 2, especially 1 Corinthians 13:13 “there are three things that remain-faith, hope, and love-and the greatest of these is love.” Vicky passed away on Tuesday, July 7, 2020 at her home in Elkhorn, surrounded by her family at the age of 62 years. She was preceded in death by her father Charles Austin. Vicky is survived by her husband Tom; daughters Frances Shaver of Elkhorn and Kathryn (Anthony) Graham of Omaha; son Charles Shaver of Elkhorn; 6 grandchildren; mother VerLynn Austin of Omaha; Sibling Becky Hillman of Omaha, Marde (Tina) Austin of Altoona, IA and James (Janet) Austin of Kansas City, MO.

The family of Vicky Lynn Shaver created this Life Tributes page to make it easy to share your memories.

In Lieu of flowers, memorials to Endless Journey Hospice ;

Send flowers to the Shaver family.