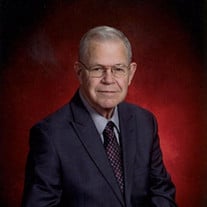 Virgil Marshall, III age 84 of Wymore, NE, died on Friday, July 5, 2019 at Brookstone Village in Omaha. He was born the son of Virgil, II and Laverne (Vrooman) Marshall on February 17, 1935 in Wymore, Nebraska. He was raised in Wymore and spent his entire life living and working in that community. He married his childhood sweetheart, Marilyn Chaplin. They were married for 54 years. Following his graduation from Doane College, with a bachelors in history, he worked at Marshall Produce Company along with his father, eventually taking over management of the business. Virgil had an interest in coin dealing which then grew into a full-time business which he launched as “The Penny Merchant” and would be known nationwide. He was a lifelong member of the Wymore Church of Christ and also served on the board of Nebraska Christian College and Deaf Missions for many years. He was a man of strong faith in Christ, had a very generous heart, was known for his integrity and treasured his family and friends. Virgil was is preceded in death by: his parents, Virgil, II and Laverne Marshall; and his wife, Marilyn Marshall in 2011. He is survived by: his daughters, Debra (Patrick) Nicholson of Wakefield, NE., Linda (Mark) Chitwood of Elkhorn, NE and Karolyn (Richard) Milliken of Papillion, NE; ten grandchildren, nineteen great grandchildren; brothers, A. Paul and Richard Marshall; sisters, Dorothy Miller and Ruth Jones. Funeral service will be held at 1 pm, Wednesday, July 10, 2019 at Wymore Church of Christ in Wymore, NE with Duane King officiating. Burial will follow in the Wymore Cemetery. Visitation will be held from 12 pm until the time of services at the church on Wednesday with the family present. Memorials can be made to either Deaf Missions Ministry of Council Bluffs, IA or Wymore Church of Christ. Reichmuth Funeral Home of Elkhorn is caring for the Marshall family at this time.

Virgil Marshall, III age 84 of Wymore, NE, died on Friday, July 5, 2019 at Brookstone Village in Omaha. He was born the son of Virgil, II and Laverne (Vrooman) Marshall on February 17, 1935 in Wymore, Nebraska. He was raised in Wymore and... View Obituary & Service Information

The family of Virgil Ralph Marshall III created this Life Tributes page to make it easy to share your memories.

Send flowers to the Marshall family.