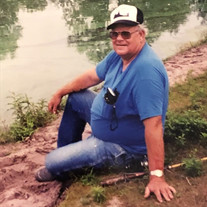 Wilbert Allen Sargent Jr, also known to his friends as Bill or “Sarge”, was born on March 29, 1935 in Valley, Nebraska to his parents Wilbert Allen Sargent Sr. and Agnes Jane Jacobs. He was baptized Presbyterian as a child. He had three half-siblings: Lester, Edward and Dorothy Sargent. Bill was preceded in death by his parents, siblings and his daughter Kathleen, along with his fourth wife Karol. In his younger years, he was affectionately known as “Wild Willy” in the small town of Valley where he grew up. He loved playing pranks on his friends and neighbors and often would land himself and whoever he was with into hot water, as he used to say. He was always there with a smile and a laugh and would often be the life of the party. Right out of high school he left to serve in the U.S. Navy and fought in the Korean War as a boatswain (water transportation). He was honorably discharged in 1956 and returned home to Nebraska. He and his first wife were blessed with a daughter Kathleen, who passed away in 1995. Later in 1972 he was again blessed with another daughter, Billie, from his third marriage. Throughout his life and marriages, Bill was blessed with three grandchildren: Rikki, Alycia, and Tyler, and gained many step-children and step-grandchildren along with great grandchildren. Throughout Bill’s life he had many jobs. He was in the Navy, owned salvage yards, both in Columbus and in Valley, NE. Along with owning auto-body shops. In his younger years, he owned “The Brown Derby Bar” in Columbus, NE., where he made a great deal of friends and memories. Bill loved to tinker with new projects and attempt to fix little odds and ends. He rarely bought anything that didn’t “need a little fixin.” Bill loved spending time outdoors tinkering with projects and visiting with his family and loved ones. He was an avid bowler in his younger years, as well as enjoying giving rides on his pontoon boat while fishing. He could always be found out in his garage or in the yard working on one of his latest projects. His infectious laugh and sense of humor made him easy to love and hard to forget. Bill spent his last few years in and out of nursing homes. He died peacefully at the age of 84 at Valhaven Nursing facility in Valley, NE. Wilbert A. Sargent, Jr. age 84, formerly of Ames, NE, died 7/8/19. Survived by daughter Billie (Adam) Bessinger and grandchildren Alycia and Tyler. Visitaiton Monday from 6-8 PM at the funeral home in Elkhorn. Graveside service with military honors by the Millard American Legion and VFW, Tuesday, 11 AM at Omaha National Cemetery.

Wilbert Allen Sargent Jr, also known to his friends as Bill or &#8220;Sarge&#8221;, was born on March 29, 1935 in Valley, Nebraska to his parents Wilbert Allen Sargent Sr. and Agnes Jane Jacobs. He was baptized Presbyterian as a child. He had... View Obituary & Service Information

The family of Wilbert Allen Sargent Jr created this Life Tributes page to make it easy to share your memories.

Wilbert Allen Sargent Jr, also known to his friends as Bill or...

Send flowers to the Sargent family.