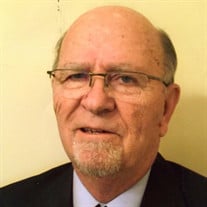 Willard "Will" Weinhold, age 77 of Bennington, NE and formerly of Lexington, NE., died on Friday, September 18, 2020 at Lakeside Hospital in Omaha. He was preceded in death by: his parents, Arthur and Alice (Schroeder) Weinhold; and a daughter, Kristen. Willard is survived by: his wife, Fredella “Fritz” Weinhold of Bennington; a daughter, Karen (Ryan) Bailey of Omaha; two grandchildren, Stella and Jackson Bailey of Omaha; brothers, Frank Weinhold of Madison, WI and Alan Weinhold of Scottsbluff, NE; and a sister, Joyce Stork of Henderson, NV. Willard “Will” was baptized and confirmed at St. John’s Lutheran Church in Scottsbluff, NE. He attended Valparaiso University and graduated in 1964, and then attended the University of Nebraska College of Law, graduating in 1968. Will met Fritz in Scottsbluff and they were married on August 20, 1966. They moved to Lexington in 1968 and Will became the Dawson County Attorney in 1969, serving until 1978. He had a private practice and served as Lexington City Attorney from 1979 until 2015, when he retired. His office was in the historic Old Library Building. Will joined Trinity Lutheran Church in 1968 and was active in the church until they moved to Bennington in 2016, to be close to family. They became members of Zion Lutheran. Will loved golf and woodworking, and spending time with Stella and Jackson. Will and Fritz had recently celebrated their 54th wedding anniversary and enjoyed golf trips with friends. Memorials can be made to the Lexington Community Foundation, Trinity Lutheran Church, Lexington Lion’s Club or Zion Lutheran Church in Omaha. For those who are unable to attended either service, the services will be webcasted. For wanting to see the service at the Trinity Lutheran Church in Lexington, go to the churches website for the link.

Willard "Will" Weinhold, age 77 of Bennington, NE and formerly of Lexington, NE., died on Friday, September 18, 2020 at Lakeside Hospital in Omaha. He was preceded in death by: his parents, Arthur and Alice (Schroeder) Weinhold; and a daughter,... View Obituary & Service Information

The family of Willard "Will" Weinhold created this Life Tributes page to make it easy to share your memories.

Send flowers to the Weinhold family.