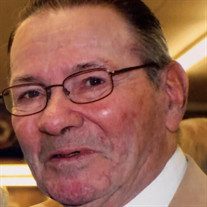 In lieu of flowers, Memorials to the family for later designation. William C. “Bill” Frye was born on February 26, 1936 in Omaha, Nebraska to Chester and Carrie (Wells) Frye. He grew up in the Elk City area where he attended grade school before attending Valley High School. As a young boy, Bill worked on the family farm. He cared for his favorite horse “Flicka” and with the “help” of his sisters became a very good polka dancer. Bill served in the United States Army for 2 years, spending one year in Korea near the DMZ. Bill married Sandy Flower on November 26, 1960 at St. Bridget’s Catholic Church in South Omaha and they were blessed with three children: Chuck, Tom and Teresa. Bill and Sandy briefly lived in Omaha before relocating to the Bennington area where they raised their three children and Sandy’s two sisters Susie and Bev. Following his military service, Bill worked for a short time as a mechanic and in construction before he went to work at Offutt Air Base and later Elkhorn Radar Station. He amassed 33 years of Civil Service by the time he retired. Bill was a member of the American Legion, VFW and the Bennington Fire Department. Bill and Sandy have been members of St. Patrick’s Catholic Church in Elkhorn since 1963. Upon moving into town, Bill completely remodeled their home, inside and out. He was a happy, likeable man with an ornery streak. He enjoyed hunting, fishing and tinkering with cars. Bill was an avid sports fan, following the Royals, Chiefs, Cardinals and Huskers. He savored a grilled steak, a cold beer and enjoyed dinner at Farmer Brown’s. Bill passed away on April 18, 2020 at the Maplecrest Nursing Home in Omaha, Nebraska at the age of 84 years, 1 month and 23 days. He was preceded in death by parents Chester and Carrie; brothers Chet, Leslie, Dean and Eugene and sisters Irma and Verla; Bill is survived by his wife Sandy; Sons Chuck (Tami) of Kearney and Tom of Bloomington, IL; daughter Teresa (Ryan) Rischling of Bennington; grandchildren Ashley (Zach) Nielsen, Kelsey Frye, Alex Frye, Max Frye, Austin Rischling, Riley Rischling and JJ Rischling; great grandchildren Willow Frye, Finnlea Nielsen, Whitt Nielsen, and many other family and friends.

In lieu of flowers, Memorials to the family for later designation. William C. “Bill” Frye was born on February 26, 1936 in Omaha, Nebraska to Chester and Carrie (Wells) Frye. He grew up in the Elk City area where he attended grade school... View Obituary & Service Information

The family of William Charles "Bill" Frye created this Life Tributes page to make it easy to share your memories.

In lieu of flowers, Memorials to the family for later designation....

Send flowers to the Frye family.