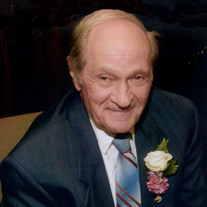 William J. Gaukel, age 82 of Valley, NE, died on Friday, May 31, 2019 at VA Medical Center in Omaha, NE. He was born the son of William P. and Pearl R. (Blake) Gaukel on August 7, 1936 in Burwell, NE. He graduated from High School and later with a BA in Electronics from Doane College in Crete, NE. William served his country from April of 1958, until his honorable discharge in February of 1960 in the United States Army. William worked for many years in the Medical Electronic Repair business in the Omaha area. Bill launched Mobile Medical Screening, a mobile X-ray, EKG, and Halter Monitor mobile service in Omaha and Lincoln, which became a huge success. This was one of his proudest achievements in life and is now a nationally accepted medical service. On May 23, 2012, William was united in marriage to Pattanan “Nan” Bumreavong. He was preceded in death by: his parents; a brother, Harry Gaukel; and sisters, Doris Wilson and Genevieve Udell. William is survived by: his wife, Nan Gaukel of Valley; daughters, Tami (Tom) Price of Alden, MN, Teresa Watts of Millard, Shari Gaukel-Torrance of Omaha and Calli Rose Pleskac of Holdridge, NE; Seven grandchildren and Three great grandchildren; along with a sister, Dorothy Schneider of Burwell, NE Funeral services will be held on Monday, June 10, 2019at 11 am at United Faith Community Church in Valley with Jim Ellison officiating. Burial will at 2 pm at the Omaha National Cemetery in Omaha with Military Honors given by American Legion Post 374 of Millard. The Reichmuth Funeral Home in Elkhorn is caring for the Gaukel family at this time and memorials can be made to St. Jude’s Children’s Hospital and can be left at or mailed to the funeral home.

The family of William J Gaukel created this Life Tributes page to make it easy to share your memories.

Send flowers to the Gaukel family.