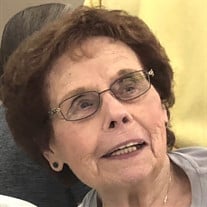 Memorials to the family. Yvonne Mary Engel was born on April 16, 1925 in O’Neill, Nebraska to Elmer and Mary (Schemmer) Ernst. She grew up in O’Neill where she attended school until her senior year of high school when the family moved to South Sioux City, Nebraska where Yvonne graduated in 1943. From an early age, Yvonne enjoyed dancing and cooking. She lived on the farm for a couple of years with her dad’s parents when she was a young child and she told about going out and collecting eggs from the hen house, picking asparagus from the wild patches and going with a wagon and selling it for 5 cents a bundle. Yvonne married Vincent Dale Engel on May 10, 1947 in South Sioux City, Nebraska and they were blessed with three daughters: Vicki, Peggy and Laurie. Yvonne has lived in Omaha, South Sioux City and Long Beach, California from 1957 to 1992 before moving back to Nebraska in 1992, settling in Elkhorn. Yvonne worked at a furniture store, as an elevator operator and as an appointment clerk for Kaiser in Downey, CA after Vince passed away. She enjoyed fishing, quilting, cooking, gardening and canning tomato juice and pickles. Yvonne was kind, caring and very social with a wonderful sense of humor. She savored fried chicken dinner and an occasional Margarita. Yvonne was active in the Quilting Club and the Elkhorn Eagles. She loved to feed people! Anyone that walked in the door and she didn’t know a stranger! She enjoyed many Sunday dinners with all the family… kids, grandkids and great grandkids and all the families dogs. Yvonne passed away suddenly on Sunday, July 5, 2020 at the Methodist Women’s Hospital in Omaha, Nebraska at the age of 95 years, 2 months and 19 days. She was preceded in death by her parents Elmer and Mary, husband Vincent, infant daughter Patricia, daughter Peggy and sisters Jane and Mary Lou. Yvonne is survived by her daughters Vicki Engel and Laurie Owens both of Elkhorn, Nebraska; 10 grandchildren and 6 great grandchildren;

Memorials to the family. Yvonne Mary Engel was born on April 16, 1925 in O&#8217;Neill, Nebraska to Elmer and Mary (Schemmer) Ernst. She grew up in O&#8217;Neill where she attended school until her senior year of high school when the family... View Obituary & Service Information

The family of Yvonne Mary Engel created this Life Tributes page to make it easy to share your memories.

Memorials to the family.

Send flowers to the Engel family.