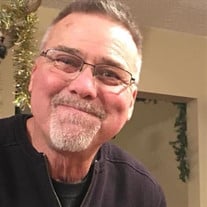 John Anthony Hickman was born April 20, 1961 in Michigan City, Indiana to Harold and Geraldine (Kaletha) Hickman. Their family moved to Valley, Nebraska in 1970 and John graduated from Valley High School in 1979. After high school, John worked as a millwright until he started his own auto body and mechanic shop. John married Becky Buchanan on August 3, 1985 at St Mark’s Lutheran Church in Valley, Nebraska where they made their home until the present. John’s passion was working on anything with wheels, which led him into his very successful business J & B Auto Body and Engine for the last 34 years. He very recently sold his business to “slow down” which we all knew was never going to happen and was working harder than ever. Early on he enjoyed racing cars on weekends and working on them all week prior with his pit crew. He also enjoyed mud drags, demolition derbies, riding ATVs, boating, jet skiing and car shows, anything that involved a motor. When racing lost the appeal, he turned to motorcycles and taking relaxing rides on back roads or the weekend poker runs with friends. He made 3 trips to Sturgis, SD for the annual bike rally on his bike which was one of the things he most wanted to do. Relaxing was not something that John knew how to do very often, but he enjoyed taking trips, even though after going to some exotic location someone would ask where he had been and he would always have to ask, “Now where were we?” John was very fortunate and unfortunate in his life, becoming a diabetic as a child led to health issues that would follow him his whole life. He experienced kidney failure which resulted in him being a dialysis patient on and off over the last 29 years. He received 1 kidney/pancreas transplant in 1991, another kidney transplant in 2001 from a dear friend, and another one in 2011. As a side effect of these health issues he also had brain cancer, skin cancer and heart problems. Through all of this he still worked every day and would help any friend in need. John passed away after a lengthy stay in the hospital on April 27, 2019 ~ seven days after his 58th birthday. He was preceded in death by his father, Harold Hickman, mother Geraldine Hickman, and brother Harold Hickman. John is survived by his wife, Becky Hickman, sisters: Vicki (Stan) Wulf of Scribner, and Mary (Mike) Myers of Leshara, brother David (Nui) Hickman of Fremont, and many nieces and nephews and great nieces and nephews. John was surrounded by a great group of family and friends that would drop anything to come help him at any time or place and he was extremely grateful for all of them. John A. Hickman, age 58 of Valley, died 4/27/19. Preceded in death by parents Harold & Geraldine Hickman, and brother Harold Jr. Survived by wife Becky of Valley, sisters Mary & Michael Myers of Leshara, NE, and Vicki & Stan Wulf of Scribner, brother David & Nui Hickman of Fremont, and many nieces and nephews. Memorial service 11 AM Thursday at the funeral home in Elkhorn. Visitation Wednesday from 5-8 PM at the funeral home. Private interment. Memorials to the Nebraska Humane Society or the American Diabetes Association. Condolences

The family of John Anthony Hickman created this Life Tributes page to make it easy to share your memories.

Send flowers to the Hickman family.